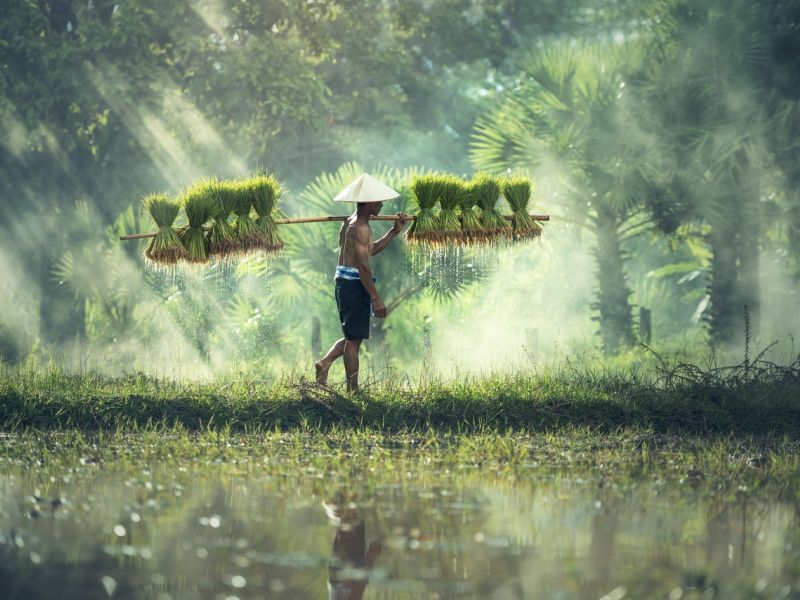 2004, China was forced to import rice when it produced 124 million tons but consumed 150 million tons. In 1989 the output was 179 million metric tons.
Rice yields in China increased dramatically with the introduction of high-yield dwarf rices. These scientifically-bred strains---crosses between Mexican- and Philippine-bred wheat and cold weather rice from China---have been so successful that farmers have been able to raise more rice on less land. The surplus land has been used to raise more profitable crops like cotton, fruit and vegetables. Some land has been used to raise fodder for cattle and cows to meet the new demand for dairy products and meat.
Rice blast is harmful disease that affects China's rice crop. Interspersing two varieties of rice have doubled yields in Yunnan and occurrence of rice blast decreased by 93 percent.
Rice fields have shrunk by 19 million hectares in the past decade as farmers have switched to other crops and abandoned marginal land.

ce is believed to have been first cultivated in China or possibly somewhere else in eastern Asia around 10,000 years ago. The earliest concrete evidence of rice farming comes from a 7000-year-old archeological site near the lower Yangtze River village of Hemudu in Zheijiang province in China. When the rice grains unearthed there were found they were white but exposure to air turned them black in a matter minutes. These grains can now be seen at a museum in Hemudu.
Evidence of rice dated to 7000 B.C. has been found near the village of Jiahu in Henan Province northern China near the Yellow River. It is not clear whether the rice was cultivated or simply collected. Rice gains dated to 6000 B.C. have been discovered Changsa in the Hunan Province. In the early 2000s, a team form South Korea's Chungbuk National University announced that it had found the remains of rice grains in the Paleolithic site of Sorori dated to around 12,000 B.C.
Wild rice grows in forest clearings but was adapted to grow in shallow flooded fields. The introduction of paddy agriculture dramatically changed the landscape and ecology of entire regions.
DNA analysis shows that these early forms of rice were different from varieties eaten today. Africans cultivated another species of rice around 1500 B.C. The Moors introduced rice to Europe via Spain.
Irrigation, agriculture (primarily rice farming), weaving and iron and bronze casting techniques were introduced to Japan from Korea and China between 300 and 100 B.C.
AndroidHeaven